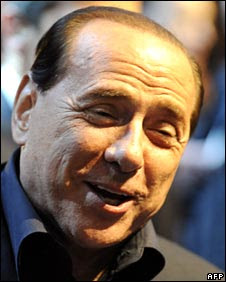 On April 6, just before the break of dawn, about 60 miles east of Rome, the Italian city of L'Aquila was rocked by an earthquake.

At least 260 people died, and 28,000 or more were left homeless. Some 10,000 buildings were destroyed or rendered uninhabitable.

It was very, very cold. Many of the homeless had to try to survive in hastily constructed tent camps.

A tragedy of enormous proportions.


The Prime Minister of Italy, Silvio Berlusconi, said of the people huddled and freezing in their tents:

"They should see it like a weekend of camping."


George W. Bush didn't use those words after Hurricane Katrina hit, but he might as well have. Hurricane Katrina showed clearly that the Bush administration simply didn't give a damn about the people of the United States - unless, of course, they were very rich.

Maybe Berlusconi, who is said to be the richest man in Italy, took a lesson from Bush as to how to respond to his constituents in the aftermath of a natural disaster.
Posted by Lowell at 10:22 PM

This jerk definitely took a page out of the George Bush Handbook for Natural Disasters.