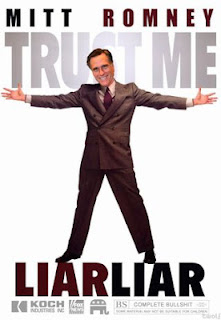 Thanks to my good friend, Art Woodstone, for the following precise critique of Mr. Romney and gang.  Mr. Woodstone never fails to undercut the pretensions of politicians who would have us believe their lies are true!

If you don't read Drudge or the Daily Caller or watch Fox News, you may have missed this:  a 2007 video of then-Senator Obama praising the Reverend Wright and blaming governmental ineptitude and inefficiency in response to the Katrina disaster on white racism.   Romney's gang dug the video out of the files and are now trying to breathe life into their "discovery" to prove Obama is a threat to our country and the human race!

The Republicans tried to exploit the same video in the campaign of 2008 without obvious success.  But when you're desperate and you're Romney, it seems you willingly rely on the devil and his disciples for help.

The re-emergence of this video reflects the extreme lengths to which Romney and his cohorts, most of them way way right of sanity, will go to see their candidate elected.  This video is merely the particular method they are busy exploiting this week.   And that leads to a question or three.  Will the Goebbels gang ever stop attacking Obama?  No!  That's their sole purpose in this presidential contest.  Thus they're using this video to cast aspersions on the president's character feigning outrage that Obama would play the "race" card, as if racism had nothing to do with the government's farcical response to Hurricane Katrina.

Does the Romney gang honestly think a) Bush's boys did enough and b) that there wasn't an element of racism in their lack of performance?  Whether they believe that or not, these "geniuses" from Drudge and the Daily Caller are bending over backward to fault Obama for his 2007 speech and to pour salt into the wound would also have the American people believe that praising the loudmouth Wright constitutes a fatal character flaw in our President.   Right?

Okay.  In that case, it's only fair that we examine a flaw or two in the character of the man Drudge and the Daily Caller would prefer to lead us as president.  In a moment of honesty, while speaking to his rich friends, he said he's not going to worry about the 47 percent (which undeniably includes the black majority in New Orleans devastated by Katrina) as they don't contribute to society [or to his campaign].

What does that say about the character of Mr. Romney?   It says he honestly doesn't care about almost half of the American people as he believes they are not worthy of his respect or support.

Furthermore, also relating to Romney's character or lack thereof, he obviously has no problem with his gang weaving long strands of lies into the fabric of his campaign.  Romney has had ample opportunity to tell these hate mongers who embrace the seductive mantra from the legacy of the Nazi, Joseph Goebbels, [who believed telling a lie often enough transforms it into truth] that he rejects their support and repudiates their distortions and outright falsehoods, as [in theory] he would any band of outlaws who lie solely to bring down another human being.

But Mr. Romney chooses not to do that.  Which makes him an accomplice in this maelstrom of lies.  So much for "character"!
Posted by Lowell at 1:51 PM